I had not planned to write about this today, but a little back ‘n’ forth on Facebook has pushed me forward on this subject.

You see, I’ve never been a fan of social media.  I’m a fairly private person and don’t want to spread my personal life in public.  However, since I wrote the book, it seems I’m expected to put myself out there more to promote my writing.  So, the first step was Facebook.   To continue to embrace healthy choices, I ‘liked’ a few sites that appeared to have healthy concepts to share.  Two of the three are excellent and I have learned something new every day just from reading their posts.  The other though?  Oh, my!  They are espousing ideas and concepts that are supposed to be healthy but in fact, are far from it.  I suspect they’re either (1) on the payroll of factory farmers and the companies that sell products laced with GMO’s or (2) they aren’t truly interested in doing the research that it takes to provide facts for those interested in true wellness.  Many of these sites are heavily driven by advertising so if you look at WHO advertises with them, you can then judge their content more clearly.

I guess this is just a lesson to all of us to never take anything at face value.  If we want to move forward with our wellness goals, it’s important to question everything.  This particular site many times has pushed ‘chocolate milk’ as the ultimate health food.  I mean, seriously?  Milk is far from healthy.  As I mentioned briefly in my ‘Cheese, glorious Cheese‘ post a few days ago, milk is actually bad for most people. Humans are the only species that drinks milk after they are weaned and we’re the only species that drinks the milk of another animal.  That in and of itself is hardly natural.  But let’s put that information aside for a few minutes and look at what milk really is and the damage it does.

First, the manner in which it is produced is always in question.  Generally, dairy cattle are NOT allowed to graze in the sunshine like these lucky cows are in the first photo. 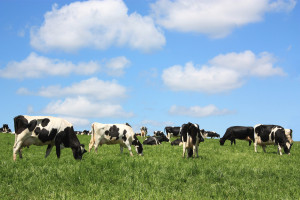 Instead, most are forced to live in barns 24/7, they’re tied to an area where they cannot move,  they sleep on concrete and are nothing but production machines.  They have no quality of life to begin with (see the second photo below.)  There is no way that this bad treatment doesn’t transfer to your food!  When you support this type of operation, then you are supporting the poor treatment of a species and that makes you part of the problem. When you buy the products, you enable these operations to prosper and continue to do great harm to the animals and to us all. 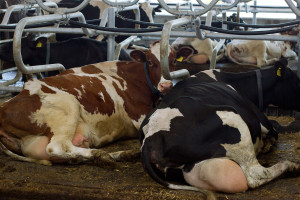 The second group pictured is feeding on whatever feed is provided.  They are commonly fed GMO feeds and of course, those poisons and toxins now go into your milk.   There is a chance those grazing in the pasture are also getting GMO’s, but it’s not as likely.

Now we get to the actual value of dairy or lack thereof, to your health and well-being.  Suffice it to say that the entire advertising campaign about how healthy dairy is for you is nothing but fraudulent.

Cows’ milk is great for calves, but it is not formulated for humans.  The dairy councils advertise that milk provides calcium, but not only does the calcium not absorb, it 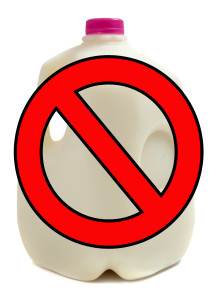 actually depletes calcium from your bones.  Even doctors don’t seem to know this, but that isn’t surprising since they have very little working knowledge of nutrition.     MILK does the body HARM!

Dairy consumption has also been linked to ovarian, breast and prostate cancers.   Understanding the Problems with Dairy Consumption

Type 1 Diabetes has been linked to dairy consumption.

And again, back to the whole contamination issue:  Milk is highly contaminated with rBGH, a bovine growth hormone, which is used to increase milk production in dairy cattle.  Once you add that, the cows end up with inflammation of the mammary glands simply because their bodies were never MEANT to produce in that manner, and so they must be given antibiotics.  That, plus the GMO’s and pesticides all show up in the milk that you and your loved ones may be drinking.

When I have a recipe that calls for milk, I now use organic coconut milk.  I like the SO Delicious brand of unsweetened coconut milk.  I’ve used it for years in casseroles, sauces and baked goods and no one has ever noticed that I don’t use dairy.   You can use canned coconut milk, refrigerate it and then, carefully skim off the cream portion and whip it as you would whipped cream for a great dairy-free topping.

As for the drink du jour?  How about fresh, purified water?  We can never get enough of it!

If you wish to find out more about the excellent sites that provide the best health information as well as those that are more questionable, please comment or ask questions!