It was a rainy day so I thought it was perfect for a new project.  Our home is two stories and until recently, the only litter box in it’s ‘litter box hider’ has been upstairs.  We decided that sometimes the girls are playing hard and have a bit of a problem getting to the litter box upstairs in time when they’ve been distracted, so we bought another piece of furniture for the downstairs.  We’d tried putting a box in the half-bath downstairs but it was way too messy – and it really upset Sophie, the bird, to have the bathroom door open by her cage. So we decided we needed the additional hider.  Oh, my, what a project!

I’ve put together a lot of this type of furniture in the past.  It’s fiberboard underneath it all so it weighs a ton.

We just have to hope there are no Wilma-style floods in our future.  I bought this on Amazon for under $200 and it actually looks quite nice.  It did, however, take a sweaty hour and a half to put it together by myself.  The photo to the left is from the listing.    It came in a big, flat, rectangular box.  The UPS guy kindly brought it in the door for me.  That’s when the fun started!

Of course, no project in our home happens without a LOT Of help, as you can see in the photo to the right. 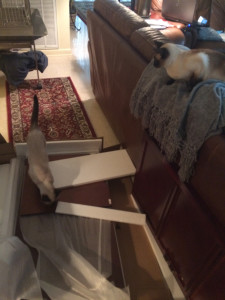 They had to inspect the packaging, inspect the pieces and every screw and hardware item.   While it is heavy and bulky, the parts did eventually go together – but not without wrenching my already – mangled back.  A few things didn’t work such as the plastic ‘caps’ to go over the holes where the screws are on the inside.  They just fell off.  Still and yet, it wasn’t that big a deal until I got to the seemingly simple job of attaching the doors.

The instructions stated that there were pre-drilled holes for the screws.  There were actually little dents.  It was difficult to screw the screws into the uber-hard particleboard furniture base, and the first one, predictably, ended up stripped.  :::sigh::: It took as long to do those four hinges as it did to put the rest of it together.

Anyway, the finished product looks great!  The girls have inspected and seem to like it. 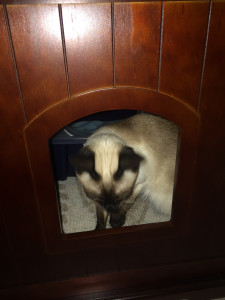 It actually looks far nicer that it did in the photo in the listing.

I had purchased a new high-side litter box for this as well and also am using the the new “blue-sand litter”  (See previous post here: http://www.sukismiller.com/cats/danger-to-your-cat-corn-again/ ) Yes, it’s a lot for our girls to take in.  Too many new things at once especially when you consider that their world is very small and very controlled and of course, limited to our home.

You never can tell.  We could end up having a chat with the ‘cat whisperer’ if the girls are not comfortable with it all in a few days. 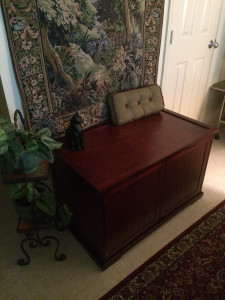 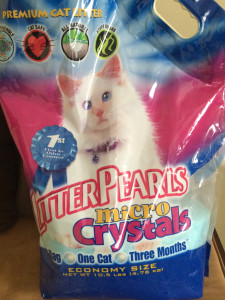 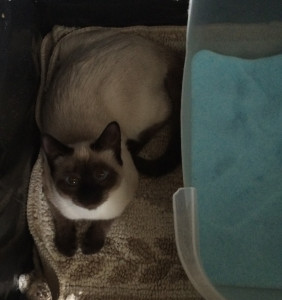