STEP AWAY FROM THE PHOTOSHOP!

I’ve never been a fan of social media, but entered the madness anyway when I wrote the book to promote it.  It was then that I was confronted with the massive misuse of Photoshop in postings and for that matter, entire Facebook pages.   I’m wondering when it became ok to change photos and present them as authentic?  Oh, we all know about the major PS fails  on magazine covers, where models lost entire arms or look freakishly thin, or where a Kardashian goes on a Photoshop Diet and poorly alters her own body.  Narcissism in our society is out of control!

However, I’m also seeing this disturbing trend in photos that photographers present as ‘nature’.   Any way you look at it, it is misrepresentation of the subject a well as the skill level of the photographer.  What’s even more upsetting to me is that people are so gullible and naive as to believe these photos are real and ‘share’ over and over again!

Here are a few recent examples that caught my attention.  The first one is a pair of Hyacinth Macaws.  These are the largest of the Macaw family and are truly stunning birds in their own right, without photographic manipulation.  What is even more alarming is that whomever digitally altered these photos and presented them as ‘real’ didn’t even bother to check to see if the ORIGINAL photo is online, as was the case in this one: 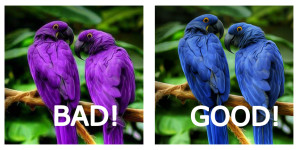 The correct photo was actually probably manipulated as well, based on the smooth texture of the entire photo, but it was done without creating a garish, fake subject.

Here is another photo that has been not only Photoshopped but was further enhanced by adding something that was, I suspect,  never in the original photo.  Note the swans – they were clearly never there to begin with.  And even in the most ideal conditions, when trees turn color, 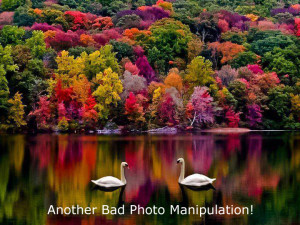 they don’t turn purple or pink. In this particular one, the shadows are off as well.  Note the crisp shadows under the swans yet the shadows along the tree line are soft.  AND The sand on the shore is pink.  No, not in New Hampshire.

Almost every single day, I see similar illustrations of lack of integrity by artists, photographers and those who steal the work of artists and photographers and manipulate in truly alarming ways.  It may seem like something small to most of you but to me, as a graphic artist and designer who does indeed use Photoshop as a tool to create designs from scratch, I find it to be yet one more example of the inability of humans to do anything authentic on their own.

And one final example.  This one is yet another of ‘fall color’ supposedly in New Hampshire. 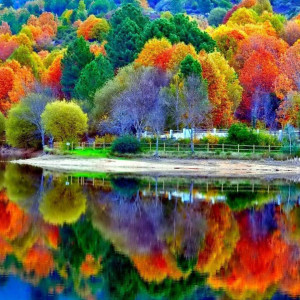 Yes, this one is poorly manipulated as well.  BUT you can see where they added color tones in blue and purple.  And what about that neon green grass? It seems that folks are determined to try to make nature look fake when nature is simply beautiful all on her own.