A bright, beautiful life is gone. Thank you, Big Pharma.

This morning, I awoke to a newspaper article about a local dental hygienist who was killed by a hit and run driver while walking by the beach.  I held my breath as I read further because they initially used her first name in the article and she didn’t go by that name.  But shockingly, it was indeed our friend and hygienist of 20 years, Stephanie Collins, who was lost.  This is my first post that I’ve written through tears.

We are heartbroken by this news as are all of the people who knew Stephanie.  She was an absolute ray of sunshine!  I never saw her when she wasn’t happy and glowing. She was 49.  She had a son.  She had a great relationship.  She was loved by her co-workers and her patients and her friends.  The worst part of this is that it didn’t have to happen. The sidewalk was very, very wide – maybe 15 or 20 ft wide. To run someone over like that, the driver would have to purposefully aim and jump the curb.

The woman who hit her kept going and was eventually stopped by a witness who saw it, when they blocked the road with their vehicle, and she was unable to continue.  The woman was obviously on drugs – PRESCRIPTION DRUGS – and even told the officer she’d been aiming for a bicyclist!  This is just heartbreaking on so many levels.

We all have so many questions and may never get any answers.  First, this woman who hit our friend appears to be age 43.  In the newspaper article which detailed the police report, she’d been taking Xanax and Benadryl for sleep, she said. One doesn’t expect a 43 year old to have sleep issues.  Those are more common with older individuals.   She said she was trying to quit the Xanax and was taking another drug, Trazadone which is an anti-depressant and sleep-enhancer.  The big question?  Who prescribed these drugs and why was she not supervised?  It would seem that this ‘medical professional’ would be complicit in this crime.  Yes, I know doctors can’t be responsible for their patients when they’re out of their sight, but still, they ARE responsible for making sure the patient doesn’t have that many drugs available at once.  Of course, the drugs could’ve been obtained illegally.

Still and yet, this is just another tragedy that has been brought on by this country’s dependence on and adoration of prescription drugs. 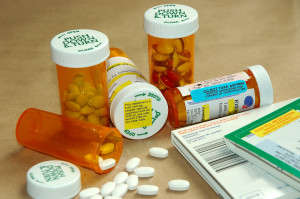 Drugs are prescribed to sleep, to stay awake, to lose weight, to gain weight, to allow those with heart issues to eat crap, to allow smokers to stop smoking (though in reality, they’re just substituting one addiction for another), to allow drug addicts to stop taking the hard stuff and become addicted to a lesser drug.  Drugs are taken like candy by those who are looking for a quick buzz, a long high and a big ‘down’.  Big Pharma counts on the addictive habits of Americans for their massive profits. Reports have shown that the main desire of pharmaceutical companies is indeed to ‘hook’ patients on their drugs, thus gaining a lifelong customer.

Drugs are readily available to most all people because doctors’ have a ‘cut ‘n’ drug’ attitude.  If they can’t cut it out and can’t drug it out, then they don’t want to deal with patients.  In my experience with myself and family members, doctors these days are truly not healers.  They are interested in the billing.  They spend the minimal amount of time with you, rarely making eye contact, and watching the clock so they can hurry you along to the billing window and they can go to the next patient.  Disgustingly, a doctor visit isn’t complete unless a patient walks out with one or two scripts in hand.  Because of this tendency in the current ‘Western Medical’ thinking, very few people are really healed.  The big band-aid is the script.   The sad part?  So many patients aren’t happy unless they walk out with these scripts.

THIS is how so many drugs become available illicitly.  Doctors just write the scripts and that is that. Out of sight, out of mind.

When did the sense of personal responsibility disappear?  When did doctors decide it is ok to hand over dangerous drugs to people who are incapable of understanding what they’re taking?  The concept of ‘the magic pill’ is drilled into the public’s collective minds every single night at the news hour with all of the commercials by pharmaceutical companies. “Ask your doctor…”  Seriously?   A GOOD doctor who knows what he or she is doing or who CARES about patient care will prescribe only the minimal amount that might be necessary.

I can’t help think during this sad time, how a beautiful, bright life was taken because of greed by doctors and Big Pharma, and an ill-informed patient.  How many others are suffering because of these bad decisions?  And how many more will be affected by similar medical malfeasance?

As for us?  There is a reason that we refuse prescription medications.  If we keep ourselves well and if we make sure we never become ill, then we won’t need any of these poisons.  And should we have an issue, we try going the natural route first.